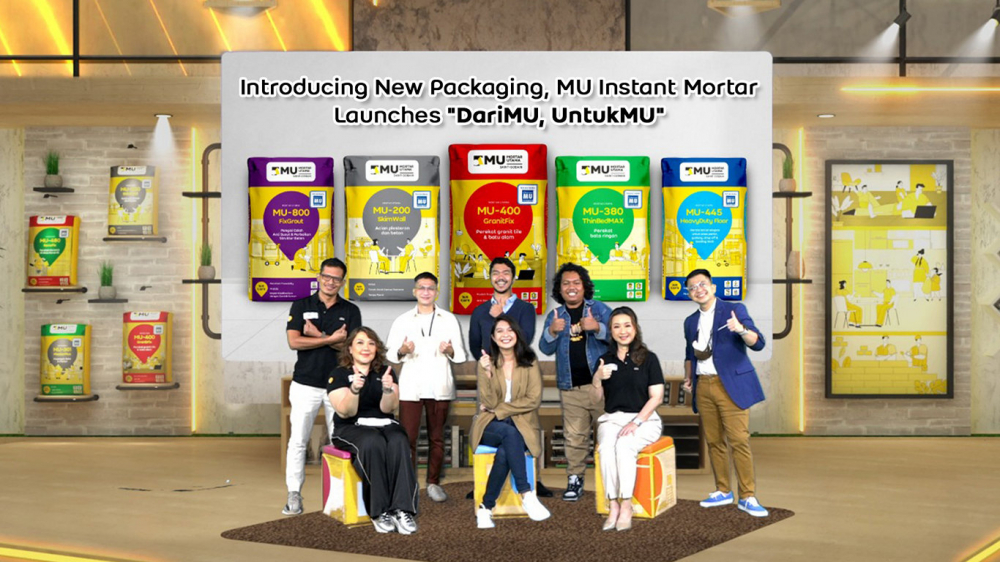 Jakarta, October 15, 2021 - PT. Cipta Mortar Utama or known as Mortar Utama (MU), officially launched its new logo and packaging through an event with the theme “DariMU, UntukMU” which carries the #WeCare campaign. The launch event was conducted online through Mortar Utama's Youtube and Instagram channels.

The message of #WeCare was raised by Mortar Utama because we believe that all decisions and activities we do always start with concern, including in the process of building houses and choosing building materials.

The figures who attended and shared their inspirational stories came from actors, content creators, writers to architects such as Kemal Mochtar, Marshel Widianto, Kristo Immanuel, Marchella FP, and Atelier Riri. The event was lively due to the attractive appearance of Ambyar People who had gone viral with his dance on TikTok social media.

Through this activity, it is expected to be a form of an invitation to the wider community to start their caring actions. Previously, MU had invited Instagram users to show their concern through the #PeduliVersiMU competition and the winner was announced at the launch event.

PT. Cipta Mortar Utama is the largest instant mortar producer in Indonesia. For more than a quarter of a century and has contributed to the building and life of Indonesian families. Since 2011, Mortar Utama has joined Saint-Gobain which is an international company providing building materials. Now, while maintaining the brand that has been attached to customers – Mortar Utama (MU) launched a new logo and packaging. Mortar Utama is committed to continuously providing solutions and innovations needed in every development process.

Ivana Ijaya, Managing Director of Saint-Gobain Indonesia feels the need for changes to be made as a form of continuous innovation while still prioritizing consumer needs, which is also the main focus of Saint-Gobain. “At Saint-Gobain, we always strive to provide the best solutions and full support for every innovation in the markets in which we operate. This new logo and packaging is a clear proof of our commitment to continue to grow and move together to create sustainable solutions following Saint-Gobain's vision, namely Making the World a Better Home (making the world a better place to live) "said Ivana.

Meanwhile, Apsara Herman, Marketing Director of Saint Gobain Indonesia, said that the launch of MU's new identity is the beginning of a new chapter in MU's journey to becoming a better consumer partner. "Message #WeCare, which has been a value held by MU, will continue to be the foundation of all of our initiatives in producing products and services that provide comfort and security for users and homeowners," said Apsara.

"In addition, MU also invites more parties to join in the action of caring according to the calling of each. We believe caring is a universal language that can unite us all,” said Apsara.

350 years and is a world leader in providing construction products and services that promote innovative solutions with a view to sustainable living. Listed in the Fortune Global 500 Companies, Saint-Gobain is present in 70 countries with more than 165,000 employees equipped with research and development centers spread across various countries.

PT Cipta Mortar Utama is the largest mortar company that was established in 1996 and produces instant mortar under the Mortar Utama (MU) brand which is produced using international standards and modern technology. MU Instant Mortar is known to have various advantages such as being practical, efficient, and producing quality building work. As of June 2011, PT Cipta Mortar Utama has become part of the global community of Saint-Gobain Group.